Dynamite Paragraphs - How to teach your students to analyse brilliantly 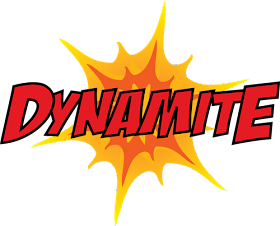 This method is suitable for analysing both language and literature.

This strategy comes from material that was shared by an AQA adviser for English at a recent course attended by my super colleague Karen Cunningham @kcquietcorner.

The adviser gave a bank of words that can be used to construct deeper, more probing analysis of language and encourage more detailed responses, especially under the time constraints of exams. However, as I have found this week, this method works equally well with students in lower years.

So I took the word banks and created two posters that I stuck up in my room. 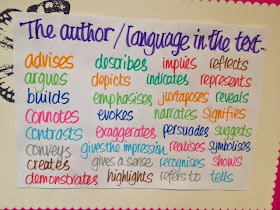 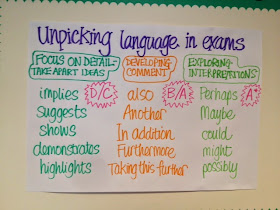 After seeing students keen to take photos of the posters I reckoned it would also be useful to create printable versions, which I now have. 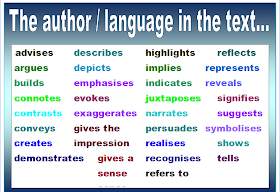 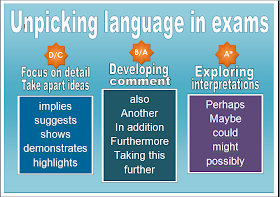 The first poster demonstrates how paragraphs might be started, encouraging a wider range in vocabulary right from the off. I’ll use the first class I tried this with as my initial example and I’ll replicate actual responses from the students. It was my Year 11 set 4 (out of 5 sets) and we had been studying the poem “Bayonet Charge” by Ted Hughes. I was trying to teach them the old ‘write a lot about a little’ strategy and students had picked out 3 quotations that they thought would be worth further exploration (and hopefully would then replicate in the exam).

Here’s the poem in its entirety: a brutal, powerful and heartbreaking snapshot into what must surely be the final moments of a WWI soldier as he goes over the top.

Suddenly he awoke and was running - raw
In raw-seamed hot khaki, his sweat heavy,
Stumbling across a field of clods towards a green hedge
That dazzled with rifle fire, hearing
Bullets smacking the belly out of the air -
He lugged a rifle numb as a smashed arm;
The patriotic tear that had brimmed in his eye
Sweating like molten iron from the centre of his chest, -

In bewilderment then he almost stopped -
In what cold clockwork of the stars and the nations
Was he the hand pointing that second? He was running
Like a man who has jumped up in the dark and runs
Listening between his footfalls for the reason
Of his still running, and his foot hung like
Statuary in mid-stride. Then the shot-slashed furrows

Threw up a yellow hare that rolled like a flame
And crawled in a threshing circle, its mouth wide
Open silent, its eyes standing out.
He plunged past with his bayonet toward the green hedge,
King, honour, human dignity, etcetera
Dropped like luxuries in a yelling alarm
To get out of that blue crackling air
His terror’s touchy dynamite.

I modeled how to create a Dynamite Paragraph with the help of the students, as a whole class activity; the students were then expected to do two more on their own. To start off, one of the students chose the line from the second stanza:
“In what cold clockwork of the stars and the nations
Was he the hand pointing that second?”

It’s a complex and challenging extract: the second stanza sees almost a slowing or a freeze-frame of the soldier charging as his final thoughts occur and he begins to question his existence.

We first looked at what we considered to be the first two words worthy of exploration: “cold clockwork”. We discussed each word in turn. What did the word ‘cold’ connote? The students came up with suggestions such as ‘heartless’ and ‘unemotional’.

Then we moved onto ‘clockwork’ which seemed harder for the students, but in its purest form they agreed related to time. Therefore, the two words together gave a sense of time being uncaring.

We then tried the same method to look at the words ‘the stars and the nations’. Through discussion and questioning, the students deduced that this might relate to the universe (stars) and conflict between countries (the nations), or war.

Now we needed to write the paragraph so we referred to the first poster to get a starter sentence. Students will need practice in order to embed this type of sentence starter but it doesn’t take very long to get the hang of it.

In the second stanza, Ted Hughes creates the impression of the soldier questioning why he is there: “In what cold clockwork of the stars and the nations/ Was he the hand pointing that second?” 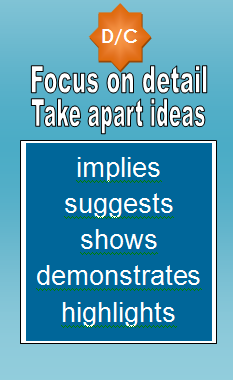 We now moved to the second poster to construct our first PEA bit of the paragraph and we chose: “this suggests” from the first column and came up with our first layer of meaning. 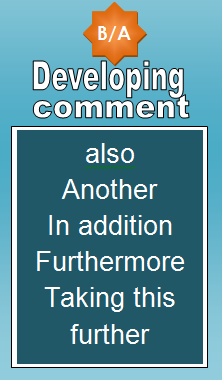 In the second stanza, Ted Hughes creates the impression of the soldier questioning why he is there: “In what cold clockwork of the stars and the nations/ Was he the hand pointing that second?” The words ‘cold clockwork’ suggest that time will move on whatever happens to this soldier; that it is unfeeling and doesn’t care.


Many students that struggle to move from D-grade-type responses would probably end their analyses here. But, instead, you return to the second poster and choose a word or phrase from the second column in order to take the analysis a step further, e.g. 'This could also imply that...' or 'In addition to this...' and then move onto another point about the same same quotation. This is what we came up with at this stage:

Further to this, the mention of ‘the stars’ seems to suggest the universe, backing up the idea that time is moving on, whatever happens on Earth at that moment. The soldier is realising that his life is very small in comparison with the universe. The mention of ‘the nations’ suggests the countries on Earth which are at war with one another.

Pretty good so far! But we’re not done, because we now need to add the final layer, the piece de resistance: an interpretation of the entire idea evoked by the quotation. This is where A* students come into their own and the idea of interpretation might seem out of reach for many lower ability students. However, when given a structure to work from I’ve found some students are more than capable of coming up with some astonishing ideas: a great example of setting the bar as high as possible and seeing what happens. 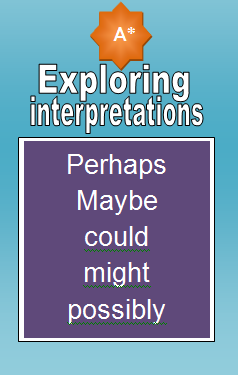 So we go back to the second poster and now choose a third layer of analysis using the third column, one that allows some left-field thinking and encourages imaginative thinking. “Maybe”, “This could possibly mean”, “Perhaps”.

It could be that because the starters are suggestive rather than concrete, the students feel confident in trying some original ideas out. Higher ability students are much more confident about suggesting outlandish ideas; lower ability students much less so: they fear failure and are embarrassed about getting things ‘wrong’.

So we had a go at a third layer in our model paragraphs, each student having an individual go and then we shared and discussed some of the outcomes. They were AMAZING. Sheri’s in particular blew our minds so we chose his answer for our model:

In the second stanza, Ted Hughes creates the impression of the soldier questioning why he is there: “In what cold clockwork of the stars and the nations/ Was he the hand pointing that second?” The words ‘cold clockwork’ suggest that time will move on whatever happens to this soldier; that it is unfeeling and doesn’t care.
Further to this, the mention of ‘the stars’ seems to suggest the universe, backing up the idea that time is moving on, whatever happens on Earth at that moment. The soldier is realising that his life is very small in comparison with the universe. The mention of ‘the nations’ suggests the countries on Earth which are at war with one another.
Hughes may possibly be suggesting that the soldier is actually having an existential crisis in this split-second, which is ironic as he now almost certainly is facing death. Hughes could be emphasising here how pointless our lives really are as humans when we are so tiny in the universe and the history of time. The fact that war has made life even shorter is the cause of anger for Hughes, I think.

As our fab LSA Andy commented as we were packing up, “If someone had ever told me I’d even hear the word existential in this class, let along used in such a powerful way, I’d never have believed them!” I agreed. Sheri obviously has a great vocabulary, but he’s shy and often reluctant to commit pen to paper. This simple structure actually gave students the tools with which to construct sound analytical paragraphs but, added to that, an opportunity to go a stage further and attempt to be creative. Other students’ work, although perhaps not in quite the same league as Sheri, surpassed anything else they’d done in terms of analysis of language all year.

I’ve tried it with all of my classes now, including a Y8 cover class I’d never taught before in their study of The Lady of Shalott. They lapped it up. Here are some example of the Dynamite Paragraphs written by the year 8s in response the question: “How does Tennyson create the sense that Camelot is a magical place in this part of the poem?”

Tennyson describes the appearance of Camelot from the outside: “Four grey walls, and four grey towers/ Overlook a space of flowers” This actually suggests that Camelot is not magical because the word ‘grey’ is repeated and we usually associate grey with something dull and quite boring. However, the ‘space of flowers’ suggests beauty and colour as a contrast, which might smell lovely in the air. In addition to this idea, Tennyson could even be suggesting that, from the outside, Camelot might look ordinary, but if you are on the inside looking out, it looks beautiful all around. Perhaps he is saying that you only really feel the magic of Camelot when you are in there as it is so special and surrounded by beauty.

Tennyson starts with the description: “On either side the river lie/ Long fields of barley and rye”. This highlights what surrounds Camelot and show how it stands out from the landscape of ordinary crops. Although they do not seem magical described like this, if you imagine it, it could imply that the crops’ colours of yellow and gold are beautiful. Tennyson could even be showing the difference between the ordinary farmers and worker and the people that live in Camelot. The farmers see the fields as part of their normal day of work but the people living in Camelot would look out of their windows onto the gold of the fields and the silver of the river, making it seem precious and magical.

The Dynamite Paragraphs are such a simple concept but they highlight an area of analysis that seems such a leap for many students to make and they’ve worked really well so far, including when practicing Paper 1 language questions that ask how writers create effects.

I must give full credit to the lovely @kathdarliston85 who came up with the name Dynamite Paragraphs when I shared this with her and the equally lovely @FranNantongwe when they visited the other day. Thank you both for your insights and views as we discussed this strategy.

UPDATE:
Just look what @JamieClark85 did with the idea of Dynamite Paragraphs! 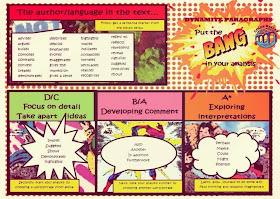